It was the dead of winter, 1987, and Stan the Arabian had been sold to one of the other students at Calta Stables. I wasn’t looking looking for a horse, but I had mentioned to one or two people that I might be interested in buying if the right horse came along. Hilton and Kristin Hack had been out taking a clinic in Bragg Creek in the fall at the same time the annual Elkana Ranch fox hunt was being held (a mock hunt with no actual foxes). They’d run into friends Rob and Jacquie Bishop, who were participating in the hunt, and Rob was riding a 7-year-old, black, Anglo-Arab gelding that he mentioned was for sale, for $1000, if they knew anyone looking. At the time they didn’t but a few months later, there was me, considering buying a horse.

So, off I went to Bragg Creek with friends Kristin and Tracy to have a look. When we pulled in the yard, there he was, waiting near the house in a tiny corral. Not that it mattered a great deal, but he wasn’t black. He was a dark bay. He also wasn’t seven years old, but twelve. This one mattered more. He was a little older than I’d had in mind for a horse I wanted to turn into a jumper. He was an Anglo-Arab, although it was tough to see what was under that bear-like winter coat.

Around the dining room table after the ride, the photos came out, and the stories. The photo below gave me a sense of the horse he’d be come spring. Gorgeous. But the stories, they were the best. My favourite was the one where Rob rode Echo into the hall at Elkana Ranch during an event, rode him right through the crowd, up to the bar to get a drink. And then there was the one where he used Echo to pull a calf out of a bog that none of the other horses would venture into.

On the drive home, the joke became “Echo the Wonder Horse” who could do, would do, absolutely anything! What the stories revealed was how much Rob loved that horse. He was only selling him because the family had started raising Pintos and Echo didn’t fit the program. That and Rob was a western pleasure kind of guy when it came to showing, and Echo was far from a western pleasure kind of mount. 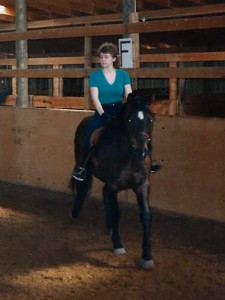 A couple of days later, I met the Bishops at an arena in Bragg Creek so that I could try Echo on good footing under tack. Other than a tendency to high-headedness, he was perfect. Such a fun ride … and smooth! I was sold, but that’s when the third bit of misinformation came to light. They weren’t asking $1000, they were asking $1500. At that time in my life, an additional $500 might as well have been $5000. It was more than I could afford and more than I was able to access. I was disappointed. So were the Bishops.

But, not to be deterred from the sport, I was back out at Calta Stables the next evening to ride one of the Hack horses, the thoughts churning in my mind. “I didn’t need my own horse anyway, right? I have plenty of opportunities to ride other people’s horses. Why have the trouble and expense of my own? It was for the best really, that it didn’t work out. Yes. I believe it was. What a lucky break. Whew, dodged that bullet.”

As I was tacking up Daisy, and thinking, Claudia Hack came to tell me there was a call for me. For me? At the stable? How odd. It was Jacquie Bishop. They felt I was the right person for Echo and they wanted me to have him. They were accepting my $1000 offer. For a second I was uncertain how to respond. Apparently, I’d done quite a good job convincing myself that I didn’t need a horse of my own. The truth was, I didn’t, but oh how I wanted one, and this one in particular.

By the end of the phone call he was mine and I picked him up that weekend and brought him home to Calta Stables. It was the beginning of twelve and a half eventful years together. Too long a story to tell in this post. It seems Echo the Wonder Horse warrants at least two installments in the To All the Steeds I’ve Loved Before series. Tune in next time when I’ll tell you just why Echo was in that tiny pen when I first went to see him. Some of you horsey folks may have already figured that out.

One thought on “Echo the Wonder Horse (Steeds … Chapter VII)”