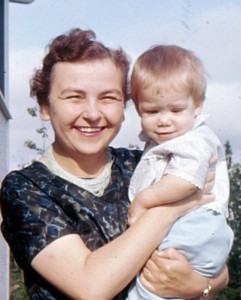 As far back as I can remember, I’ve been going to Frieda’s place. Frieda is my aunt, my mother’s older sister by eight years, and Frieda has always been a part of my life.

When I was a child, many summers we travelled to Frieda’s in Kamloops, BC from our home in Charlie Lake in the northeast corner of the province. My mother at the wheel, we’d make the trek in two days, stopping to camp somewhere along the way in whatever unit we had that year, a tent (or two), a small trailer, and there were varying configurations of the family unit depending on which of my older brothers were not yet old enough to avoid family holidays like the plague.

It was only the south end of the province but Kamloops felt like a completely different world — the sandy soil, the dry hills, the hot weather. These days, I love spending time in the desert and maybe those early vacations in the Kamloops summers were the precursor to this love.

Frieda’s place was pretty basic accommodation, a 2-bedroom unit in a 2-storey building, a garden apartment. Her suite was on the main floor and opened onto a grassy courtyard on the back side. We had a marvellous ten-acre lakefront yard at home but nothing you could really call lawn. I remember spending hours of vacation time playing on the lush, green grass just outside her door, running through the sprinkler to cool off, staying out in the warm evenings until it was dark.

By my early 20s, Frieda retired and moved with her older sister Manda to Vernon where they rented an apartment in a 3-storey walk-up. This 2-bedroom suite in a large complex would become the place I’d remember best and fondest when thinking of Frieda. I will never forget arriving at this place, the warmth of the greetings and the smell, that indescribable smell of Frieda’s place for which I could never pinpoint the source. It was a pleasant, maybe floral scent that permeated the place and everything in it, a smell that met me every time I entered and stayed with me for a day or two after visiting.

The visiting routine was comfortingly the same. Stop at the front of the building on arrival, ring the apartment, and Frieda would meet us on the stairs around the back to show us where to park and let us in. And on leaving, you could count on Frieda and Manda waving from their balcony as you drove out.

Frieda’s place was filled with treasures, many of them from trips she and Manda took, usually bus tours with Wells Gray. There were provincial flowers, figurines of dancing girls, birds, lots of birds, Blue Mountain pottery, decorative plates, and other collectables on every surface in every room. A nightmare to keep free of dust I’m certain, but a part of the charm of visiting.

By the time Manda turned 90, twenty-five years after moving in, the 3-storey climb from the parking area was becoming too difficult and it was time to move. The apartment that will be forever etched in my mind had to be let go and my aunts moved to Coldstream Meadows, a retirement community just outside Vernon. The amazing thing was, even though the building was brand new and filled with new flooring and fixtures and cabinetry, the first time I visited, there was that sweet, welcoming smell that I’d come to associate with Frieda’s place.

That was seven or so years ago now, Manda’s been gone since 2011, and this past week my sister and I spent five days clearing out Frieda’s apartment, finding new homes for all of her things. She’d already pared down the collectables when they moved to Coldstream, but there were still a few dancing girls, and provincial flowers, along with blankets and dishes and furniture that have been a part of these many years of memories. 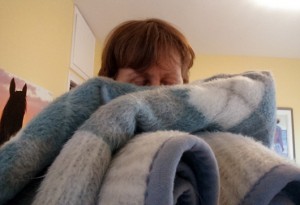 Frieda has a new place now where she has little need for most of her belongings, a very nice facility in the quaint village of Lumby where she gets the assistance she needs at the ripe old age of nearly 96.

I started unpacking when I arrived home and when I pulled a fuzzy blue blanket from my luggage, a blanket I’d adopted from Frieda’s belongings, there it was, that smell, the smell of childhood memories, the smell of a warm welcome, the smell of Frieda’s place.

A Triad of Troubles

Camping is the Cure

Springtime at the Barn

The Hazards of Home